Professorship for Biochemistry and Molecular Pathobiology

The general goal of our research is to unravel the molecular mechanisms of chronic liver disease including liver cancer and metastasis as basis for innovative diagnostic and therapeutic approaches.
Main research areas are alcoholic and non-alcoholic fatty liver disease, tumor metabolisms, the interaction of (disseminated) tumor cells with non-parenchymal liver cells, chemotherapy-resistance and the characterization of beneficial effects of phytonutrients. 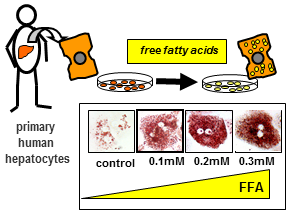 In vitro model of hepatocellular steatosis. Primary human hepatocytes are cultured in the presence or absence of fatty acids, mimicking the clinical situation in obese individuals with fatty liver disease. Incubation with fatty acids is inducing a dose-dependent accumulation of triglycerides in the cytoplasm of the hepatocytes (here depicted: Oil red staining of fatty acids). (Wobser et al. Cell Res. 2009).

Nonalcoholic fatty liver disease (NAFLD) is now recognized as the hepatic manifestation of the metabolic syndrome and as the most common cause of chronic liver disease worldwide. In many cases, NAFLD presents as „simple“ steatosis but in a significant number of cases it progresses to its more severe form nonalcoholic steatohepatitis (NASH). NASH is characterized by liver inflammation and injury thereby determining the risk to develop liver fibrosis and cancer. We try to understand the molecular mechanisms causing and promoting NAFLD progression. Among others, we assess the impact of different nutritional lipids, the microbiome and different genetic factors. One research focus lies on the question how liver steatosis affects the development and progression of other forms of acute and chronic liver injury, such as infection with hepatitis viruses or different toxins.

Chronic alcohol consumption is one of the main etiological factors for liver disease worldwide. Although only a fraction of drinkers develops significant hepatic inflammation (alcoholic steatohepatitis), and even less progresses to significant hepatic fibrosis and cirrhosis, alcoholic liver disease is the second most common reason for liver transplantation in the United States and Europe. One aim of our research is to unravel the molecular mechanisms and (genetic) risk factor that promote alcoholic liver disease, with a focus on the development of hepatic fibrosis. One specific question is the combined effect of (obesity induced) fatty liver and alcohol consumption. Indeed, there is strong epidemiological evidence for a causative link between the consumption of alcohol and progressive liver disease in obese individuals. Actually, we revealed in preclinical models that alcohol and (obesity induced) liver steatosis cause not only an additive but even a synergistic effect of different pathological steps including hepatic inflammation and fibrosis.

Hepatic stellate cells (HSC) are non-parenchymal, retinoid-storing cells located in the perisinusoidal Space of Disse. In response to hepatic injury, quiescent HSC get activated and transform to highly proliferative myofibroblast-like cells, which are the cellular source of excessive extracellular matrix expression and deposition in chronic liver disease. Therefore, the activation of HSC is considered as a key event of hepatic fibrosis. We are aiming to characterize the molecular mechanisms during the HSC activation process to find potential serum markers for hepatic fibrosis and therapeutic targets to inhibit the development of hepatic fibrosis. Moreover, we are assessing hepatic stellate cells also in the context of primary liver cancer as well as hepatic metastasis. Also in the interaction with tumor cells, HSC get activated and promote tumor growth. Thus, strategies to inhibit HSC-activation also have potential for the prevention and treatment of hepatocellular carcinoma and metastasis of extra-hepatic tumors.

Hepatocellular carcinoma (HCC) is one of the most rapidly rising causes of cancer-related mortality. Morbidity and mortality correlate directly with surgical resectability of the primary tumor. However, outcome is mostly poor, because the majority of patients are diagnosed at an advanced stage and the few approved systemic therapeutic options are restricted to defined disease stages and have only limited efficacy. Our research aims to unravel the molecular mechanisms that promote the development and progression of HCC. One focus lies on the role of hepatic stellate cells (HSC). We have developed in vitro and in vivo models to study the mutual interaction between HSC and tumor cells and identified different secreted metabolites and proteins as critical mediators of the mutual crosstalk. Furthermore, we assess metabolic alterations in the cancer cells as well as in the tumor stroma. Besides glucose and methionine metabolisms special focus lies on lipid metabolisms and the question how hepatic steatosis promotes malignant transformation of hepatocytes. 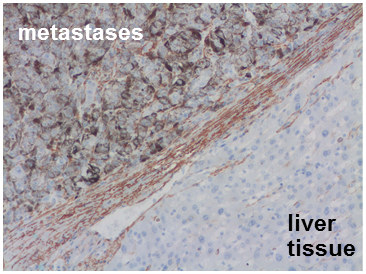 The true prevalence of metastatic liver disease is unknown but, depending on the origin of the primary tumor, 30-70% of patients dying of cancer have hepatic metastases. Despite significant advances in the treatment of hepatic metastasis, they remain a critical determinant of patients’ survival. We aim to identify the reasons why the liver is such an attractive „niche“ for disseminating cancer cells. Once, we focus on the role of hepatic stellate cells (HSC). Similar as in response to liver injury, hepatic metastasis is leading to HSC-activation and some lines of evidence indicate that hepatic stellate cells are „partners in crime“ for liver metastasis. One second research focus is the impact of steatosis on the attractiveness of the liver for disseminating tumor cells.

Chemotherapy-induced liver injury
(A) Intraoperative image of a human liver with chemotherapy-induced injury. (B) Model of molecular mechanism of irinotecan-induced steatohepatitis. (1) Alkalization of the lysosomal pH and herewith impairment of the autophagic flux. (2) Impairment of the mitochondrial function: Herewith, shift from mitochondrial towards peroxisomal β-oxidation, enhanced formation of reactive oxygen species (ROS) and activation of ERK and p38. (Mahli et al. Gut 2018). 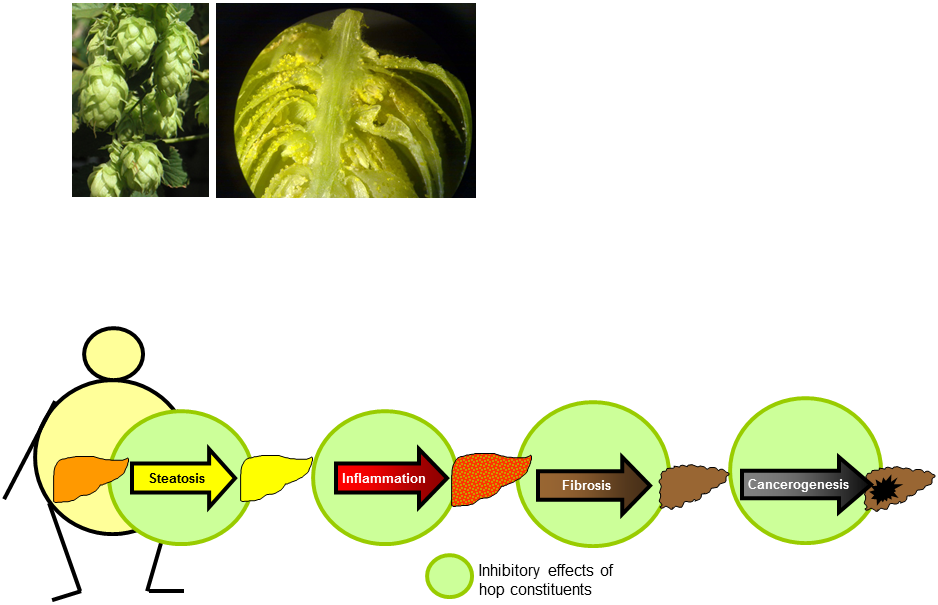 
Phytonutrients have a high compliance and acceptance rate in the population, which is particularly advantageous for the prevention or treatment of chronic diseases. One field of research of the lab is the analysis of health beneficial effects of phytonutrients. The main area is the analysis of compounds of the hop plant (Humulus lupulus) and their impact on different forms of chronic liver diseases. One focus lies on xanthohumol, the principle prenylchalcone of the hop plant. We have shown that this flavonoid inhibits hepatic inflammation and fibrosis as well as the tumorigenicity of liver cancer (HCC) cells. Moreover, xanthohumol inhibits high-fat diet induced weight gain and development of diabetes. A second focus lies on hop-derived bitter acids also in form of iso-alpha acids (IAA), which develop during the beer brewing process. We revealed that also IAA have hepatoprotective and anti-tumorigenic effects. Moreover, we found that the combination of IAA and xanthohumol has a synergistic beneficial effect.